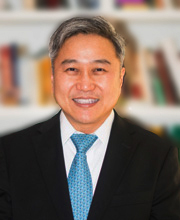 Hanming Fang is Class of 1965 Term Professor of Economics at the University of Pennsylvania and Dean of the School of Entrepreneurship and Management at ShanghaiTech University. He is an expert in public economics, applied microeconomic theory, and empirical microeconomics. His research integrates rigorous modeling with careful data analysis and has focused on the economic analysis of discrimination; insurance markets, particularly life insurance and health insurance; and health care, including Medicare. In 2008, Professor Fang was awarded the 17th Kenneth Arrow Prize by the International Health Economics Association (iHEA) for his research on the sources of advantageous selection in the Medigap insurance market. He has served as co-editor for the Journal of Public Economics and International Economic Review, and associate editor in numerous journals, including the American Economic Review. Professor Fang is a Fellow of the Econometric Society. He is also a research associate at the National Bureau of Economic Research, where he served as the acting director of the Chinese economy working group from 2014 to 2016. He is also a research associate of the Population Studies Center and Population Aging Research Center, and a senior fellow at the Leonard Davis Institute of Health Economics at the University of Pennsylvania. Professor Fang is also a special term professor at Fudan University and Peking University. He also serves as the scientific director of the Australia–China Population Ageing Hub located at the Center of Excellence in Population Ageing Research at the University of New South Wales in Australia.

“Golden Ages”: A Tale of the Labor Markets in China and the United States

The COVID-19 Pandemic and Job Creation: The Role of Global Supply Chains

Competition and Quality: Evidence from High-Speed Railways and Airlines

The Collateral Channel of Monetary Policy: Evidence from China

The Demand for Reverse Mortgages in China

In the Shadows of the Government: Relationship-building during Political Turnovers

How Do Family Planning Policies Reshape the Life of the Chinese Elderly?