We exploit the staggered rollout of China’s drug price zero-markup policy (ZMP) to study physician-induced demand in healthcare. Our results show that the drug expenses in the treatment hospitals dropped by 63 log points (47 percent) compared with those of the control group; however, the expenses for non-drug services were 28 log points (32 percent) higher in the treatment group than in the control group. Our results provide robust evidence for physician-induced demand. 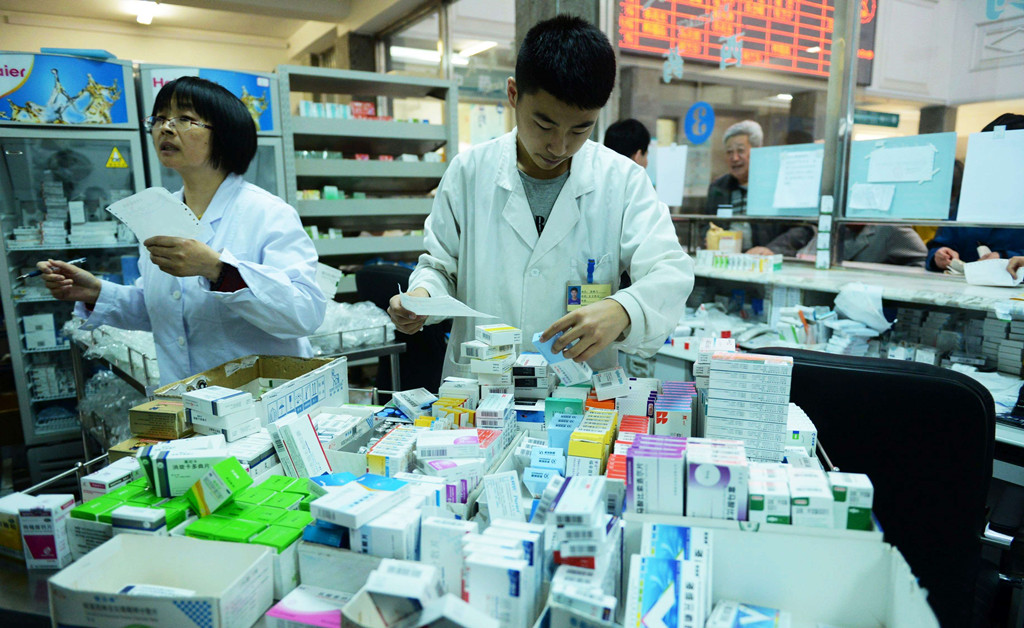 Health care expenditures are growing rapidly in all countries around the world (World Health Organization 2018). A large empirical literature provides explanations for and policy recommendations to curb  rising health care expenditures. The literature can be divided into two strands. The first strand focuses on demand-side explanations, including the moral hazard in the demand for medical care resulting from third-party (i.e., insurance) payments. This strand includes the RAND Health Insurance Experiment (Newhouse et al. 1993) and the Oregon Health Insurance Experiment (Finkelstein et al. 2012). The second strand focuses on supply-side behavior. For example, Finkelstein et al. (2016) use patient migrations to show that about half of the variation in medical expenditures across the regions in the United States was driven by differences in physician behavior. Important literature in the second strand aims to document empirically how health care providers respond to financial incentives. The literature examines how changes in reimbursement rules, or medical prices more generally, affect physicians’ (or providers’) diagnostic, prescription, and treatment choices (see, e.g., Gruber and Owings 1996; Yip 1998; Dafny 2005; Clemens and Gottlieb 2014; Alexander 2020). Although the contexts of the studies differ in the sources of price changes or the margin of the physicians’ behavioral response, the literature has found that, somewhat paradoxically, physicians tend to prescribe more services in response to either an increase or a decrease in the related reimbursement rates. The typical explanation is that when the price of a service is lowered, physicians will prescribe more of the service to make up for the lower unit price to maintain an income target; when the price of a service is raised, physicians will have an incentive to prescribe more of that service to increase his or her income. However, as is well known, empirical tests for models of physician-induced demand are remarkably challenging because it is difficult to separate the demand and the supply sides; overuse of medical procedures or drugs could also reflect consumer demand and/or physicians’ beliefs about consumer demand (see Currie et al. 2014).

In our recent study, Fang, Lei, Shi, and Yi (2021), we exploit a drug pricing reform in China, called the zero-markup policy (ZMP), which had a staggered rollout starting in 2009, to provide evidence of physician-induced demand. Prior to the ZMP, hospitals in China were allowed to mark up drug prices by up to 15 percent of the wholesale prices, and the profits from drug sales were commonly viewed as one of hospitals’ key profit generators. The ZMP mandates that hospitals can only charge drug prices at their procurement cost with zero markup (i.e., no profit is allowed from drug sales).

We then test the predictions empirically. In the county studied in our paper, the ZMP was first rolled out in the basic medical facilities, including township or community health centers; a few years later, it was implemented in higher-tier hospitals located in the county seats. We exploit the staggered rollout of the ZMP and a unique comprehensive claims data set to empirically test the predictions of the model.

Table: Impact of the ZMP on Drug, Non-Drug, and Total Expenditures: Admission-Level Analysis 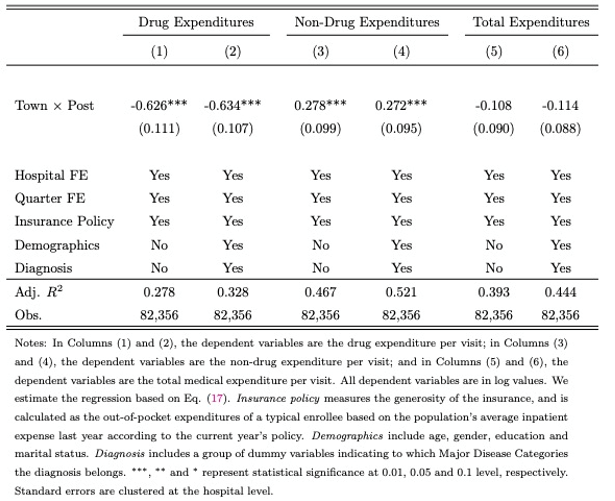 Our results show that the drug expenses of township health centers (the treatment group) dropped by 63 log points (47 percent) compared with those of county hospitals (the control group); at the same time, we find that expenses for non-drug services were 28 log points (32 percent) higher in the township health centers than in the county hospitals. It should be noted that during our sample period the prices of non-drug services were determined by the government and were fixed. Therefore, the increase in the non-drug service expenditures is driven by the changes of quantity and/or the switching from cheaper to more expensive services. Interestingly, we find that although the expenses increased for all categories of non-drug services in the township health centers (the treatment group), the relative magnitude of the increases depends on how discretionary the non-drug services are: the increase is the largest (around 30 log points or 35 percent) for spending on tests and examinations, bed fees, and nursing services where physicians are likely to have more discretion on the amount to be ordered, while the increases are smaller (about 7 log points or 7 percent) for less discretionary medical materials. Overall, we find that the reduction in drug expenses is almost fully compensated by the increases in expenses for non-drug services, and thus the patients’ total medical spending does not change significantly. We also find that the ZMP reduces the number of patients in the treated hospitals relative to that in the control hospitals. The empirical evidence is consistent with the model’s prediction only when the demands for drugs and non-drug services are at least partially physician induced. Similar results are also found when we analyze the data at the physician or hospital levels.

Our paper contributes to the literature on physician-induced demand in several ways. Relative to the existing literature, we analyze a unique empirical setting of the effect of the ZMP to test for physician-induced demand. The literature tends to find that in general, physicians prescribe more in response to a decrease in the price to maintain an income target. However, this chain of reasoning has some caveats. An increase in prescriptions following a decrease in price is also consistent with patient-driven demand, as long as the patient’s out-of-pocket expense is positively linked to the price; thus, in general, it is impossible to distinguish patient-driven demand from physician-induced demand. However, more prescriptions raise physicians’ income only if each prescription results in a positive profit, a condition that is precisely violated in our case under the ZMP. Indeed, our theoretical model yields robust predictions of the impact of the ZMP on physicians’ choices between drugs and non-drug services and highlights the stark contrasts of the impact on ZMP with or without physician-induced demand: if drug demand is completely patient driven, it will never be lower following the ZMP; however, the demand for drugs may be lower only if it is at least partially physician induced. In this regard, our analysis complements the literature on physician-induced demand.

Our paper extends our understanding of the health care system in China, and we believe that the results are also relevant for other developing countries where controlling health expenditures is likely to be an important policy objective. Various health care reforms were implemented in China in recent decades; however, detailed evaluations of the effects of the reforms, particularly the ZMP, are scarce (Yi et al. 2015; Chen et al. 2017). We contribute to this literature by presenting a theoretical framework of physician-induced demand and deriving and testing the theoretical predictions of the effects of the ZMP. We also employ a cleaner difference-in-differences identification strategy on a rich claims-level data set.