The Dark Side of the Chinese Fiscal Stimulus: Evidence from Local Government Debt

China’s 4 Trillion Yuan stimulus in November 2008 may have been successful in allowing China to escape from the Great  Recession. But the massive increase in local government debt in the implementation of the stimulus package also led to crowd out of the more productive private sector investment. Yi Huang of Graduate Institute in Geneva and his coauthors Marco Pagano and Ugo Panizza discuss this "dark side" of the Chinese stimulus.

China reacted to the global financial crisis with a massive fiscal stimulus. In November 2008, the government announced a package worth 4 trillion Yuan (approximately 590 billion USD). The plan was implemented immediately and most of the funds were channeled through local governments. The stimulus package focused on investment. In 2009, the growth rate of fixed capital formation nearly doubled with respect to the pre-crisis period and the contribution of fixed investment to Chinese GDP growth was close to 90 percent (Wen and Wu, 2014). This surge in investment was achieved by injecting financial resources into state-owned firms and local infrastructure projects. There is evidence that under the stimulus plan, new bank credit was disproportionately given to state-owned firms rather than to more productive private firms (Deng, Morck, Wu, and Yeung, 2015; Cong and Ponticelli, 2016; Ho, Li, Tian, and Zhu, 2016; Bai, Hsieh, and Song, 2016; and Ru, Gao, Townsend, and Yan, 2017).

At first glance, the stimulus was a resounding success. China escaped the Great Recession and became one of the main drivers of world economic growth (Wen and Wu, 2014, and Ouyang and Peng, 2015, among others). However, this was at the cost of exacerbating a long-standing problem in China’s economy; namely, that high-productivity private firms fund their investment out of internal savings while low-productivity state-owned firms survive thanks to easier access to credit (Song, Storesletten, and Zilibotti, 2011). In a recent paper (Huang, Pagano, and Panizza, 2016), we show that the massive increase in local government debt that resulted from the stimulus package did indeed crowd out investment by private manufacturing firms.

The Rise of Local Government Debt 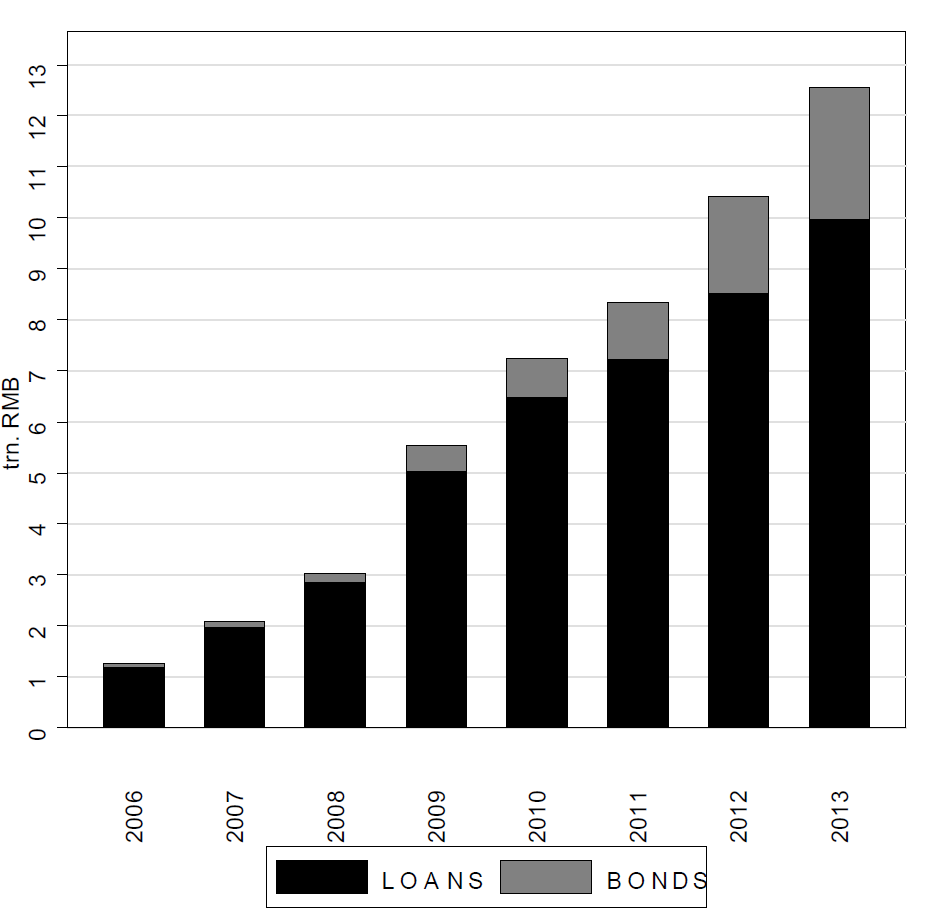 Local government debt rose from 1.2 trillion (5.8 percent of GDP) to 12.5 trillion Yuan (22 percent of GDP) between 2006 and 2013 (Figure 1), based on data for local government financing vehicles (LGFVs) in 261 prefectural level cities. [Our data cover total debt (bonds plus bank loans) owed by Local Government Financing Vehicles.] While bond issuance has grown dramatically in recent years (from 6% of total LGFV debt in 2006 to 21% in 2013), the volume of bonds outstanding is far less than the total debt, which actually consists mostly of bank loans.

Testing for Local Crowding Out

In an integrated nationwide financial market, there is no reason to expect local government debt to affect local investment; the issuance of local government debt triggers an increase in local interest rates, drawing in capital from the rest of the country and also possibly causing an increase in local savings. Eventually, the greater share of local public debt is held by investors throughout the country and any crowding-out of private investment occurs at the national level. [The hypothesis of segmentation is not necessary if external investors have a limited appetite for a certain jurisdiction. In a study of 15 emerging market countries, Agca and Celasun (2012) show that external public debt crowds out external borrowing by private corporations.] However, if the financial market is geographically segmented, the imbalance and its impact on investment is localized. This is in fact the case in China, whose financial market segmentation is well-documented in many studies (Dobson and Kayshap, 2006; Roach, 2006; Boyreau-Debray and Wei, 2004 and 2005; Allen, Qian, and Qian, 2005; Brandt and Zhu, 2007; Dollar and Wei, 2007; and Firth, Lin, Liu, and Wong, 2009). In such a situation, unless local savings increase for other reasons, placing additional local public debt with local banks requires a one-for-one tightening of credit to the local private sector (less than one-for-one if there is imperfect segmentation).

In our study, in order to investigate this local crowding-out hypothesis, we merge city-level information on local government debt with a nationally-representative survey that covers more than 350,000 manufacturing firms and uses three different empirical strategies.

Using industry-level data, we investigate whether local government debt is particularly damaging for industries that need more external funding. This approach allows us to investigate whether government debt affects investment by tightening private firms’ credit constraints. It also allays endogeneity problems by allowing us to control for city-year and industry-year effects. We show that local government debt is associated with a significantly lower investment by domestically-owned private manufacturing firms that need external financial resources, but is not associated with the investment of state-owned and foreign-owned manufacturing firms.

Using firm-level data, we test whether local government debt tightens credit constraints; we do this by testing whether local debt issuance increases the cash-flow sensitivity of investment for firms that are likely to be credit-constrained. Our focus on firm-level data allows us to rule out concerns of reverse causality from investment to local government debt. Consistently with our previous estimates, we find that local government debt affects cash-flow investment sensitivity for private sector firms but not for state-owned and foreign-owned firms (Figure 2). Our results are robust to jointly estimating an investment equation and an equation measuring the likelihood that a firm is credit-constrained. 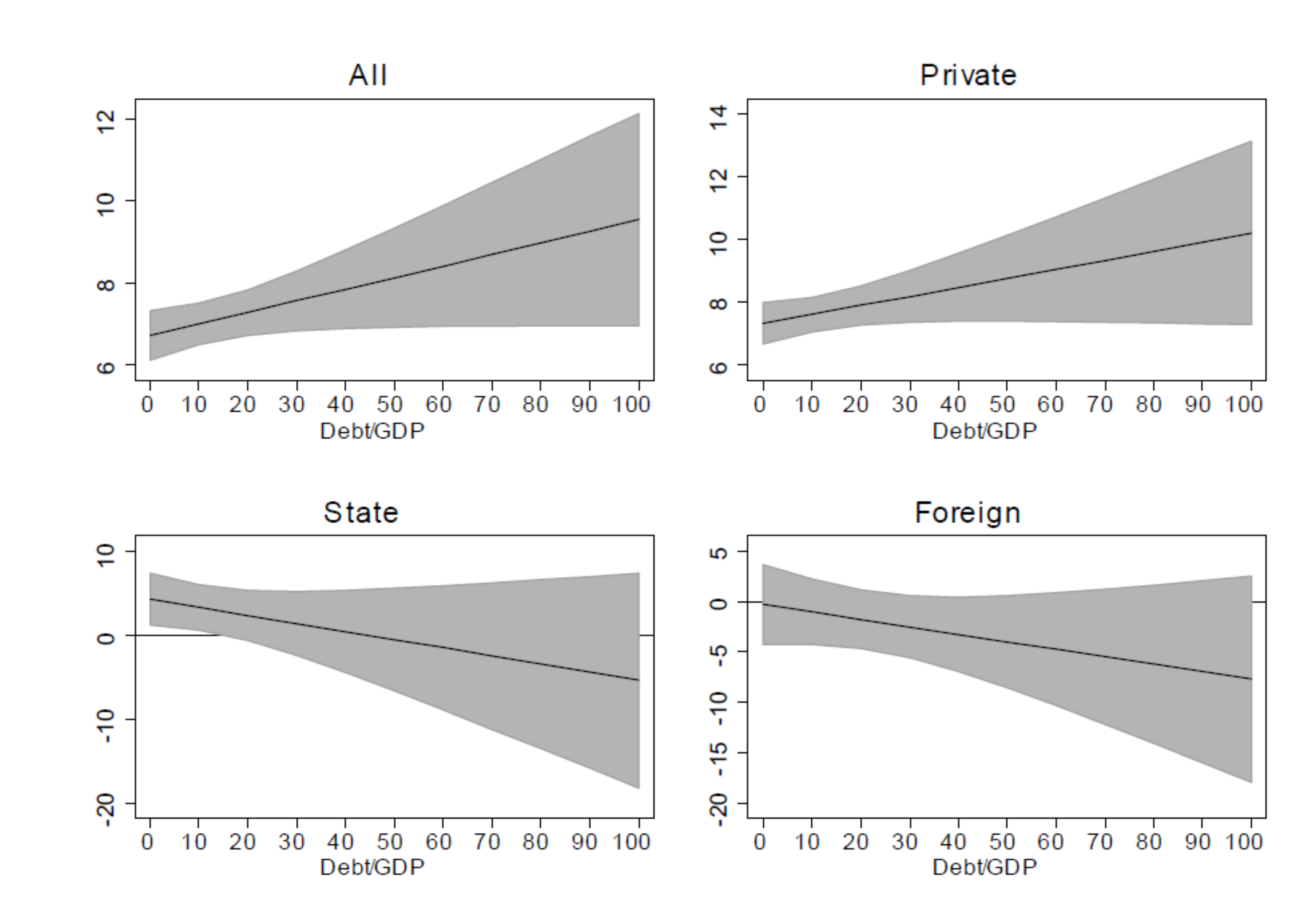 Dark Side of Fiscal Stimulus

What will be the impact of the fiscal stimulus on China’s future economic growth? The answer is not clear. While China’s aggressive policy may have prevented an economic contraction, which in the presence of hysteresis (Fatás and Summers, 2016) could have reduced China’s growth potential, the fiscal stimulus had several unintended consequences: 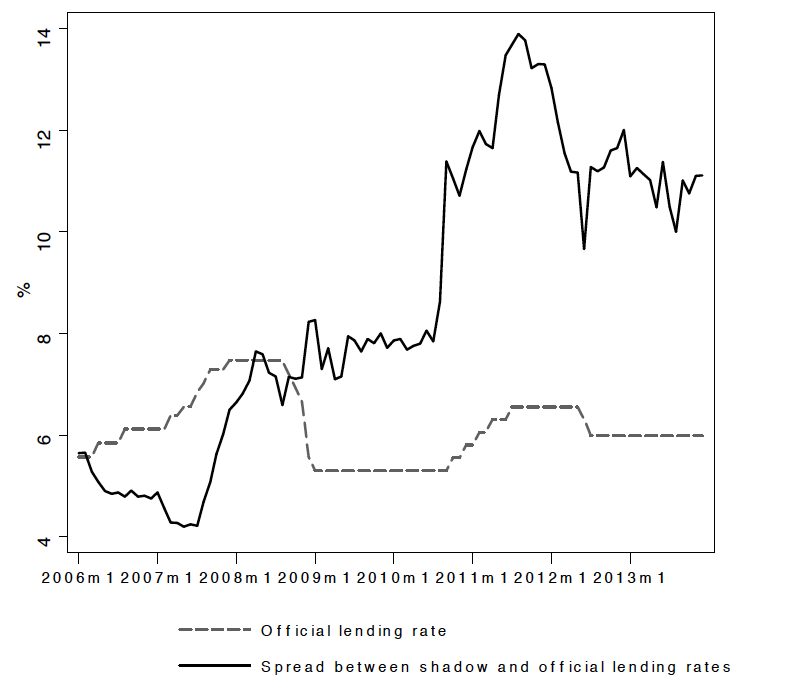 It crowded out the investment of private firms by tightening their credit constraints. This reallocation of investment from the private to the public sector is likely to undercut China’s long-run growth potential, especially in the areas where local governments have issued the largest amount of debt.

It strengthened the bank-sovereign nexus in China. This is a threat to systemic stability, as the Euro-area sovereign debt crisis has so forcefully demonstrated (Acharya, Drechsler, and Schnabl, 2014; Acharya and Steffen, 2015; and Altavilla, Pagano, and Simonelli, 2015).

Boyreau-Debray, Genevieve, and Shang-Jin Wei (2005), “Pitfalls of a State-dominated Financial System: The Case of China?”, NBER Working Paper No. 11214.