Does Good Luck Make People Overconfident? Evidence from a Natural Experiment in China

Overconfidence is a widely-documented cognitive bias that significantly influences an individual’s decision making (see, for example, Thaler and Johnson, 1990). While most of these studies focus on the influence of overconfidence, little is known about the root causes of overconfidence. In this paper, we investigate whether the experience of good luck in the present makes people overconfident about their future prospects. We measure “good luck” by exploiting a natural experiment in China — households who win an allotment in IPO subscription (in Chinese, 打新股). Following Barber and Odean (2001), we use retail investors’ stock trading behavior to infer their “overconfidence.”

Our study is related to how luck is viewed in economic theory and in reality. The outcomes of many risky decisions depend on both ability and luck. In general, economic theories assume that luck is a random, uncontrollable factor that should have little effect on future expectations. Although this is certainly correct scientifically, many people seem to think of luck in a manner in contrast with this view. In reality, it is common to see that some people “believe in luck,’’ meaning that they think good luck consistently produces success in their daily lives. People sometimes say they have lucky days or that they think of themselves as lucky people in general. For example, Michael Jordan (a professional basketball player for the Chicago Bulls) changed the number on his uniform to “change his luck” following a series of disappointing performances (See Note 1). These kinds of statements imply that luck is viewed as a personal quality that is at least somewhat stable over a short period of time.

Borrowing the theoretical framework of Gervais and Odean (2001) on learning to be overconfident (See Note 2), we hypothesize that the trader believes in luck and can determine his luck at a given period based on his recent experience of “lucky events.”  People who recently experience “good luck” may think their subjective probability of being lucky is too high and thus become overconfident about their prospects.

The unique feature of winning an IPO subscription allotment allows us to estimate its effects in a difference-in-differences framework. Ideally, to study an experiment’s effect, one would like to have an exogenous experiment in which individuals are randomly assigned to be affected by the experiment. This allows us to compare treated and non-treated individuals’ outcomes and to attribute any differences to the experiment. In China, winning the allotment in an IPO subscription is akin to such an experiment. For each IPO in the Shanghai Stock Exchange, individual investors who apply for the IPO allotment will be assigned an IPO application number for each 1,000 shares (See Note 3). This IPO application number is randomly assigned by the China Securities Depository and Clearing Corporation (CSDC) and cannot be changed. The winning allotment numbers are drawn randomly from the pool while the entire process is taped and audited.  Moreover, under the new rule of CSRC for a capped 23X PE ratio, China’s IPO in our sample period is greatly underpriced and households make a considerable amount of money if they win the allotment. Thus, winning an IPO allotment is a good setting to measure how “being lucky” influences people’s subsequent behavior.

We empirically test the effect of winning an IPO allocation on retail investors’ stock trading behavior using a panel of over eight million person-period observations of Chinese individual investors during 2014–2016. We find that winning an IPO allocation (a proxy of good luck) leads to more frequent but less profitable trading (a reflection of overconfidence). As shown in Figure 1, for the treated group (i.e., the group of traders who win an IPO allotment), the 3-month turnover rate increases from 598 percent to 612 percent around the timeframe of winning the IPO allotment. In contrast, the turnover is almost unchanged over the same time period for the control group (i.e., the group of traders who did not win the IPO allotment and had the same turnover rate prior to the IPO allotment).


Figure 1: Turnover Rate for the Treated and Control Group from Three Months before to Three Months after the IPO Allotment 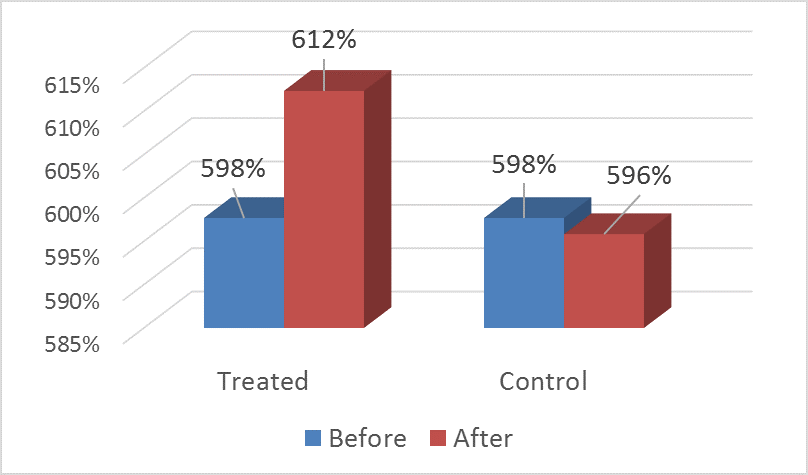 We also investigate the stock performance associated with such excessive trading. We find that the stock performance of the treated group is generally worse than the control group. In Figure 2, we split our sample into ten groups based on their total wealth. While the dollar-value gain from IPO shares is largely the same across the ten groups, the RMB-value loss associated with such excessive trading depends on the level of total wealth. Investors with a larger portfolio lose more money after becoming overconfident. We see a clear declining net wealth effect after winning the IPO allotment. For the group with the smallest portfolio value, the RMB-value loss associated with excessive trading is trivial because the portfolio value itself is small and thus the net wealth effect is largely the same as the gain from the IPO (around 19,000 RMB). In contrast, for the group with the largest portfolio value, the RMB-value loss becomes larger because the portfolio value itself is large. In this situation, the net wealth effect becomes -23, 000 RMB. That is, for the set of rich individuals, the loss due to becoming overconfident is larger than the dollar value gain from winning the IPO shares. 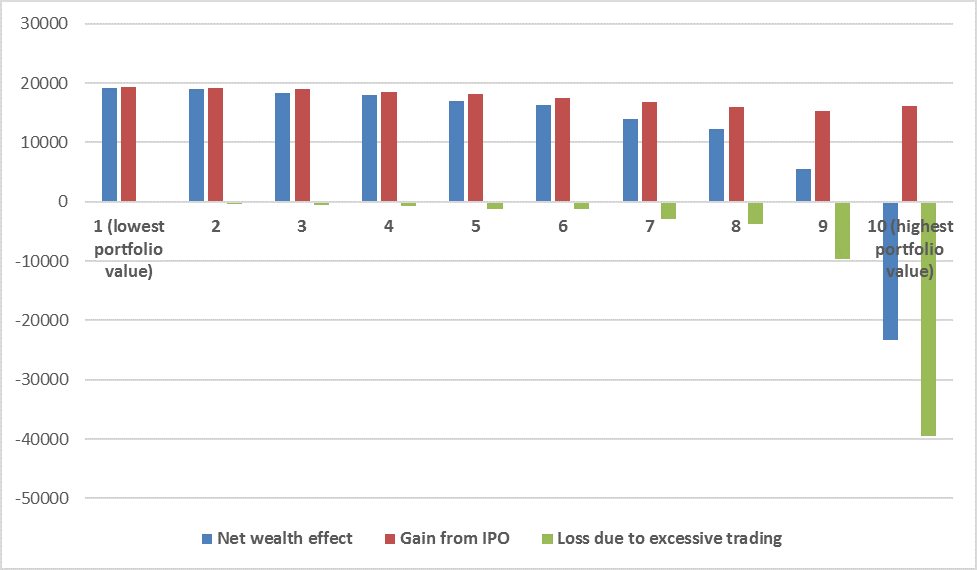 Note 2: In their model, a trader discovers his ability by his past successes or failures. When a trader is successful, he attributes too much of his success to his own ability, which leads to overconfidence about this ability.  In this model, traders learn their ability from past experiences and the bias (such as a self-serving attribution bias) in the learning process leads to overconfidence about their true ability. The more overconfident an investor, the more he trades and the lower his expected profits from trading.

Note 3: Investors with average stock portfolios worth at least 10,000 RMB in day t-20 to day t-2 relative to the IPO offer day can apply for an IPO allotment. Each 5,000 RMB is qualified for one allotment ticket, which corresponds to 1,000 IPO shares. The allotment application must be less than 0.1 percent of total IPO shares. Application results are posted on day t+2.