The need for US dollar funding during the financial stresses of March 2020, as the COVID-19 pandemic shocked markets, was evident in a number of countries (Avdjiev, Eren, and McGuire 2020; Bahaj and Reis 2020). Notably, however, China’s dollar funding and risk received little attention, even though the country’s deepening economic and financial linkages to the United States and rest of the world suggest that financial instability emanating from China could have adverse implications for the global economy. Our recent work (Kodres, Shen, and Duffie 2022) provides a deeper understanding of the dollar funding needs of Chinese banks and non-financial corporations. We show that China’s vulnerability to US dollar funding risk is large and growing, and discuss the existing and potential avenues through which US dollar funding could be supplied to Chinese entities in times of stress. 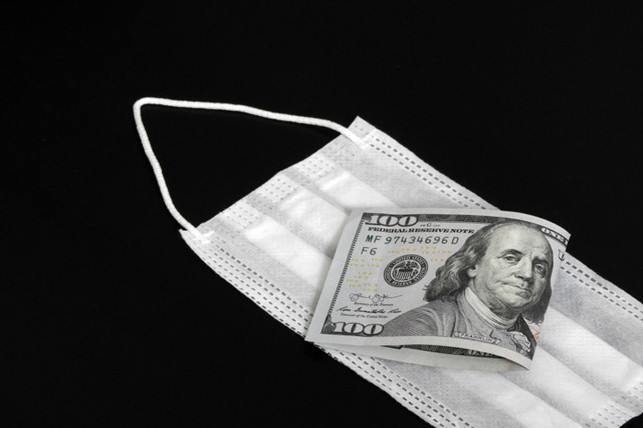 
A early manifestation of US dollar funding strains in a given currency is the cross-currency basis with the US dollar, which becomes highly negative when banks are unable to source US dollar funding at “normal” interest rates (Du, Tepper, and Verdelhan 2018). This basis is the difference between the interest rate for borrowing dollars directly and the interest rate for borrowing dollars synthetically by combining foreign currency borrowing with foreign exchange (FX) derivatives. In March 2020, the cross-currency basis for a number of currencies moved significantly into negative territory. This prompted the Federal Reserve (Fed) to re-initiate central bank swap lines with the central banks that had established swap lines with the Fed during the global financial crisis, and established swap lines with several additional central banks, including those of Brazil, Korea, Mexico, and Singapore.

At this time, the cross-currency bases for the USD/CNY and USD/CNH (covering renminbi deposits in China and Hong Kong, respectively) also moved rapidly into negative territory (Figure 1). In fact, China was among the countries with the largest relative jump in its negative basis, a move of more than four standard deviations from its 2019 mean (Figure 2). After Fed swap lines became operational, the difficulty faced by many foreign banks in swap-line countries in obtaining dollars subsided rapidly. Banks in some countries with swap lines thus had the ability to provide dollars to other banks, benefiting those banks without direct access to central banks with dollar swap lines (Bahaj and Reis 2018). This is consistent with the fact that the USD/CNY and USD/CNH bases did eventually recover, albeit more slowly than some other cross-currency bases. 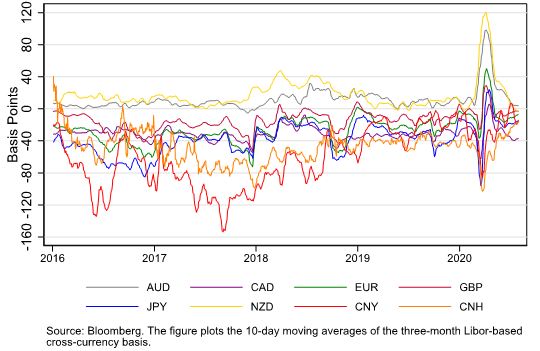 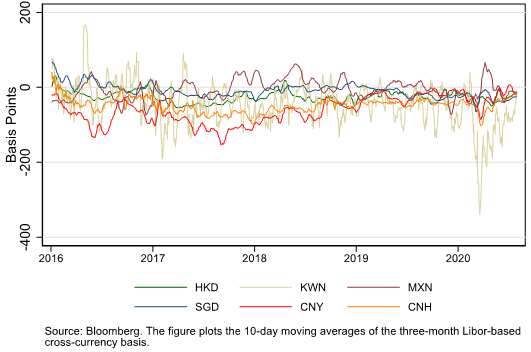 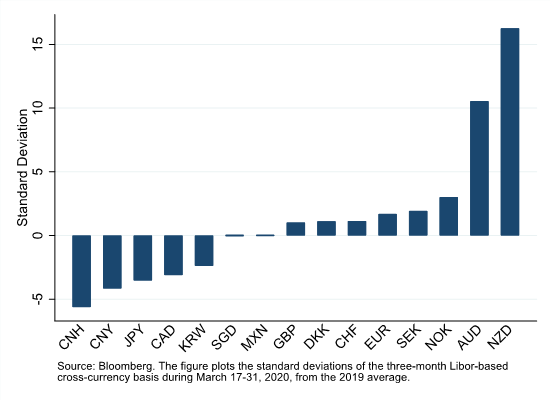 The Extent of China’s Dollar-Denominated Debt

Heavy reliance on dollar-denominated debt has been a global phenomenon for some time. Non-US banks commonly issue short-term dollar liabilities, and many non-financial firms in foreign countries also finance some of their activities in dollars. Chinese banks and firms are not exceptional in this respect.

According to data from the Bank of International Settlements (BIS), in Q3 2021, the internationally active reporting banks in China had cross-border US dollar assets that were greater than their US dollar liabilities, a dollar funding gap amounting to $471 billion. This gap is larger than that for the other countries that maintain Fed swap lines, with the exception of Japan (Figure 3). Although the BIS does not provide the maturity structure of assets and liabilities by currency, we can reasonably assume that, like most banking systems, Chinese banks rely on short-term dollar liabilities to fund their longer-term assets. And, similar to other banking systems, the residual gap is likely covered by derivatives such as currency forwards and swaps. Indeed, the fact that the cross-currency basis for USD/CNY and USD/CNH fell so dramatically in March 2020 provides indirect evidence of a need for US dollars. Unfortunately, the BIS data for China is incomplete in other ways, so we cannot completely rely on these data to verify Chinese banks’ US dollar vulnerability. 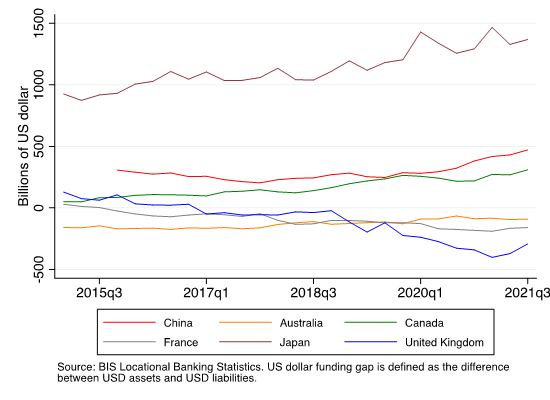 Chinese banks also have dollar liquidity and credit exposures through their lending to borrowers in countries involved in the Belt and Road Initiative (BRI). Horn, Reinhart, and Trebesch (2021) estimate that about 75% of BRI loans are denominated in US dollars. Most of these loans are provided by China’s state development banks and four largest commercial banks, which are also predominantly state owned. Although BRI loan amounts are often re-deposited in Chinese banks until used (providing offsetting liabilities), an examination of the latest available balance sheet of the China Development Bank shows a net dollar funding gap of about $100 billion in 2020.

At the end of 2019, Chinese non-financial firms had $590 billion in outstanding US dollar-denominated bonds, accounting for 36% of all dollar bonds issued by emerging market economies (CGFS 2020) and 29% of China’s total external debt. Forty percent, or $236 billion, is attributed to bonds issued by Chinese property developers and local government financing vehicles, entities that have no natural dollar-based revenues. In 2020, it was estimated that between 2019 and 2024 a total of $488 billion of US dollar bonds issued by Chinese firms were to be extinguished or rolled over with new funding.


China’s US Dollar Exposures Are Growing

Although the data are incomplete, the trend toward greater US dollar borrowing and lending by Chinese entities is unmistakable in the BIS data as well as other sources (e.g., CGFS 2020 and Horn, Reinhart, and Trebesch, 2021). The funding vulnerabilities are in evidence from the exponential growth in the use of FX swaps—a short-term derivative used to hedge funding risks—by entities in China (Figure 4). 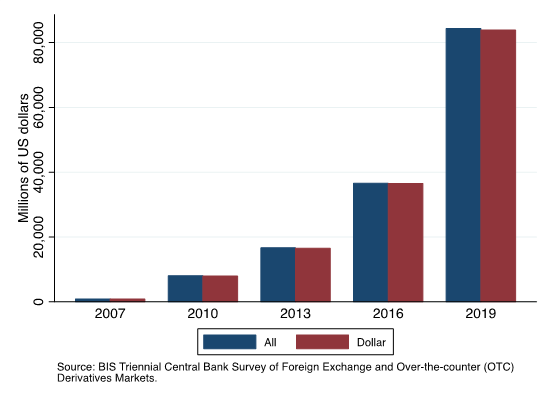 Sources of US Dollar Funding for China

Despite data limitations, it is apparent that China’s reliance on US dollar funding is large and growing. In Kodres, Shen, and Duffie (2022), we describe a number of possible sources of US dollar funding that could be exploited during a stress period. These include China’s foreign exchange reserves, the Fed's Foreign and International Monetary Authorities (FIMA) repo facility, access to existing Fed swap lines with central banks in other countries, funding through the Hong Kong Monetary Authority’s dollar swap facility, and the emerging ability to post Chinese government bonds as collateral in international financial market repo facilities. Among these, the Fed’s FIMA Repo facility (to the extent available to the People’s Bank of China), may turn out to be the most effective, in terms of size and immediacy, assuming that China’s FX reserves include a large quantity of US government securities that are custodied at the Federal Reserve Bank of New York. This facility allows a central bank with a custodial account at the New York Fed to obtain repo financing against those securities.  While the combined effect of these sources of dollar liquidity might be adequate, we believe that it is prudent for policymakers to also consider how they would be used in a stress situation and whether they should be augmented to circumvent fire sales of dollar-denominated assets and other potential adverse spillovers to the global economy, including adverse impacts on growth and financial stability.

China’s potential need, in a stressed market scenario, for incremental US dollar funding is large and growing. The dislocations in dollar funding markets in March 2020 extended to Chinese banks, as the cross-currency basis became even more negative than for many other countries. In Kodres, Shen, and Duffie (2022), we discuss some avenues through which Chinese banks and non-financial corporations could obtain incremental US dollar funding under stress, but each has its limitations, often related to its size or accessibility. Absent a means of dealing with dollar funding stresses, the adverse effects for the Chinese financial system and its economy as well as attendant spillovers to other connected financial systems and their economies could be significant. Hence, additional avenues to deal with China’s potential dollar funding shortages could usefully be considered by policymakers.