How Do Earthquakes Shape Economic Behavior?

Research shows how a disaster can impact an economy beyond the simple rebuilding process. The Sichuan earthquake induced a lifestyle shift in households toward greater spending and a structural shift of the economy away from industrial production. 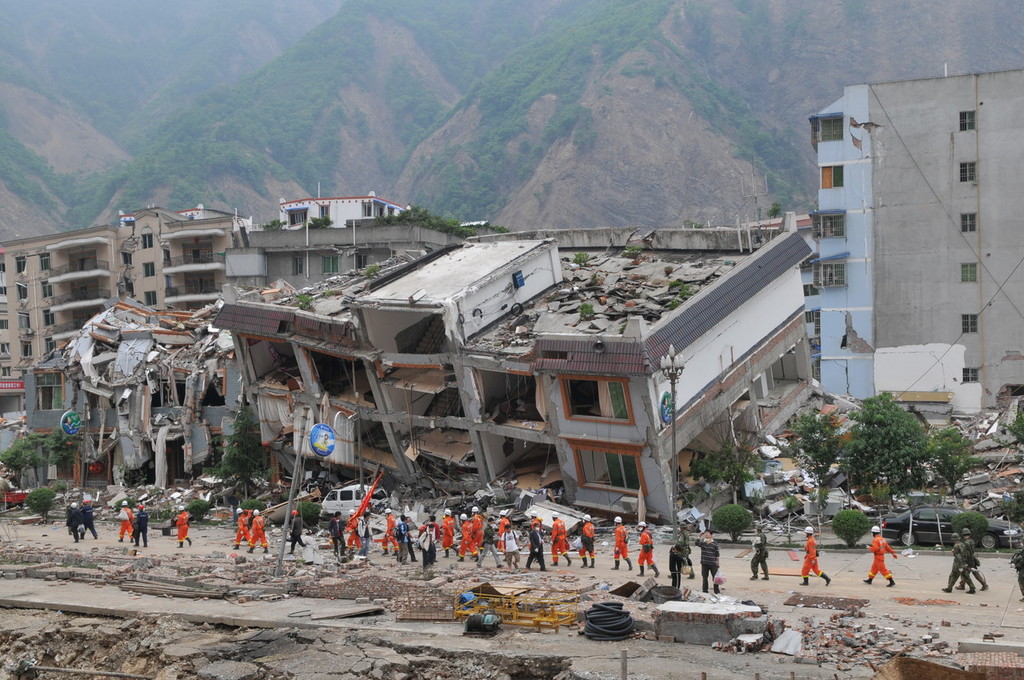 The economic cost of natural disasters is usually expressed in physical terms: destruction of assets, crop losses, costs of reconstruction and the like. Yet, experiencing a disaster also affects people psychologically and emotionally, leading them to think differently, act differently, and alter the way they make decisions—including economic decisions. In that sense, the psychological impacts of a disaster may continue to have profound economic impacts long after reconstruction is finished. A team of American and Chinese economists went in search of those psychological impacts and tried to find out how a disaster affects people as economic actors. What they found is at odds with standard economic thinking.

Because natural disasters bring destruction and hardship, people living in disaster-prone areas need to safeguard against them. It makes intuitive sense: the notion of “saving for a rainy day” is deeply engrained in our collective thinking. Economists have extensively documented how people accumulate savings in anticipation of hard times and later use those savings to get through the rough patches, a process they refer to as “consumption smoothing” (Rosenzweig and Stark, 1989; Udry, 1995). Most economic theories would thus predict that those who have experienced a disaster would start safeguarding against the next one, by increasing their savings, for instance. But in this case, the team found the opposite.

The study by Filipski et al. (2019) focused on China’s Sichuan province, which was hit by a severe earthquake in 2008. While talking to villagers after the quake, the team noticed that rather than worrying about earthquake preparedness, many of them talked about wanting to “enjoy life while it lasts.” They reported spending more time with their friends playing mahjong (a Chinese 4-player game). The team wondered whether this attitude extended to other economic behaviors such as spending and saving, and whether they would be able to measure these effects with economic data. By happenstance, some of the hardest hit areas had been surveyed in 2007; thus, there was a pre-earthquake baseline of data. The researchers conducted follow-up surveys in 2009 and 2011, which enabled them to make before/after comparisons.

To isolate the psychological impacts of the earthquake, the team focused on households who lived in areas struck by the earthquake, but whose homes were not damaged, who suffered no injuries, and who were otherwise unaffected by the quake. In other words, households who incurred no immediate economic losses in the quake but may still have been affected psychologically by the experience. Once we account for changes in external factors such as prices or job prospects, any changes to the observed behavior of such households would thus be driven by “psychological” factors.

The researchers looked at three behaviors: saving, drinking, and playing mahjong. They found that, on average, people who were spared by the earthquake but lived closer to the epicenter tended to decrease their saving, increase their drinking, and play mahjong more often. This was not due to changes in their income, which was not affected by proximity to the quake. Figure 1 shows that while a change in income was not affected by distance to epicenter, expenditures increased more for households that were closer to it. Results also held true after the researchers took into account potential confounders such as gifts given to affected households out of solidarity, price levels, or government aid.

Figure 1: Change in income and expenditures of households spared by the earthquake, by distance to epicenter 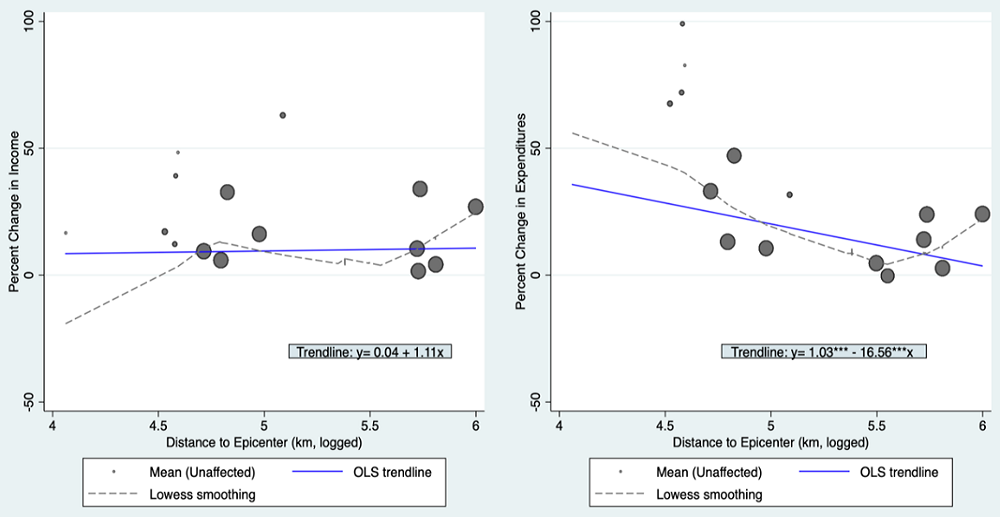 Note: Taken from Filipski et al. (2019). Changes refer to the 2007–2009 period. Percent changes approximated from difference in logs.  Data come from the Sichuan Rural Household and Migration Survey and from Research Center for the Rural Economy data.

Note: Households who were spared by the earthquake still increased their expenditures, more so when closer to the epicenter.

All three of these behaviors seem to reflect an Epicurean attitude toward life. Households closer to the epicenter seem to have become more willing to take risks, both with their money (saving less) and their health (drinking more). As for mahjong, it serves as a fun pastime but also doubles as a risk-taking activity, as players usually put up small money stakes to spice up the game. All behaviors suggest that rather than safeguarding against the next earthquake, households who lived through the tremors became more inclined, as the saying goes, to “live like there’s no tomorrow.”

The consequences of such a shift in attitudes are not straightforward to evaluate. The additional spending might give a slight boost to the local economy, but the drinking and gambling might not. It also remains unclear what happens in the longer term. The authors are able to show that the effects persisted until 2011, which was three years after the quake and long after reconstruction was finished—but after that, there is no data. It is possible that people who formed habits of spending, drinking, and playing mahjong after the quake kept them in the long run, but it is equally possible that the fear of another earthquake kicked in after some time and lead people back to more frugal ways.

Note: Taken from Bulte, Xu, and Zhang (2018). Data from 2002–2014 come from the Sichuan Statistical Yearbook published each year from 2003–2015. “Non-disaster neighbors of paired disaster” are defined as 1 if they border at least one of the paired disaster counties but did not suffer the earthquake, and 0 otherwise. “Other non-disaster” is defined as 1 if a county did not suffer the earthquake and does not neighbor any paired disaster counties, and 0 otherwise.

The finding supports the Dutch disease hypothesis. Rising prices of non-tradables as a result of massive inflows of transfers, mainly pairwise aid, attracted workers to the local service sector from the manufacturing sector, which could not easily adjust output prices. Consequently, the profitability of the manufacturing sector suffered a contraction in the short run.

Ultimately, as pointed out in a book by Chen et al. (2016)  that draws lessons from the 2008 earthquake in China’s  Sichuan province,  a combination of coping and rebuilding strategies, such as widely distributed responses, leveraging external resources, and coordinating effectively with actors on multiple levels and across sectors can enhance resilience against natural disasters, thus limiting the extent of economic fallout. When combined with a better understanding of the emotional response, consumption, and savings behavior of those likely to be affected, these lessons may assist not only China, but other countries as well, to enhance resilience to natural disasters.

This blog was written based on the following two papers and edited book: