The Reference Effect of Government Bonds on Corporate Borrowing Costs 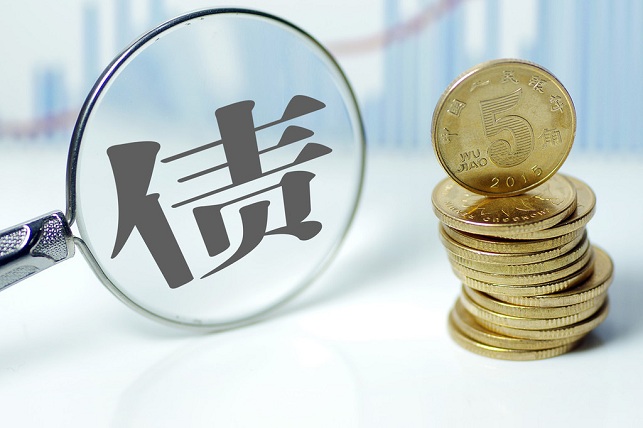 With the rapid expansion of the Chinese economy, Chinese corporations actively borrow in the onshore and offshore markets for RMB and USD bonds. By 2017, the Chinese bond market reached a value over $13 trillion, ranking it the third largest in the world after the United States and Japan. From 2007 to 2017, onshore RMB corporate bond issuances increased from $231 billion to $1,817 billion (Table 1). The offshore USD corporate bond issuance rose from $5 billion to $275 billion. The Chinese government has borrowed more in RMB than USD, in contrast to Chinese corporations’ preferences for borrowing USD bonds in the offshore market. Between 2007 and 2017, the onshore government issuance roughly doubled (from $309 billion to $593 billion), while the offshore government issuance remained at zero until October 2017

On October 11, 2017, the Chinese Ministry of Finance announced that it would issue $2 billion USD-denominated sovereign bonds, split equally into a five-year and ten-year maturity. The USD bonds were issued in the offshore market and traded in Hong Kong. Global investors welcomed the release of the bonds two weeks later (on October 26, 2017) when the issuance was oversubscribed by a factor of 11. At issuance, the five-year (ten-year) bond yielded 2.196% (2.687%), which was 12.6 (22.7) basis points above comparable U.S. Treasury bonds. Before this issuance, the USD-denominated Chinese sovereign bond market was negligible. The Chinese government had issued about a dozen USD bonds between early 1990 and October 2004, after which the trade surplus generated a surge of foreign currency reserves. By October 2017, only two USD sovereign bonds remained outstanding: one issued in 1996 (with an initial maturity of 100 years) and one issued in 1997 (with an initial maturity of thirty years and an expiration in 2027). Each bond had $100 million outstanding. The October 2017 issuance therefore raised the amount of outstanding USD Chinese sovereign debt from $200 million to $2.2 billion.

The Ministry of Finance gave four reasons for its decision to issue USD sovereign bonds in a press conference two days before their issuance: 1) To continue opening the Chinese financial markets; 2) To provide a pricing benchmark for other bonds issued by Chinese entities; 3) To enhance the confidence of international investors in the Chinese economy; and 4) To optimize the Chinese government’s debt structure. Some market participants also conjectured that this issuance was meant to rebuke the rating agencies that had recently downgraded Chinese sovereign debt earlier in 2017.

We focus here on the second item mentioned in the press conference: the potential for USD reference bonds to aid Chinese firms’ USD corporate borrowing. The interaction between corporate and sovereign bond issuances has been studied quite extensively. Some studies find that high-quality corporate bonds and sovereign bonds substitute for one another (Greenwood et al., 2010). Other researchers find that government and corporate bonds can be complementary if government bonds reduce the risk of corporate bond investing by providing a reference (benchmark) security (Bekkum et al., 2019; Dittmar and Yuan, 2008). Little is known about how such interactions affect the Chinese offshore market. The October 2017 issuance of the two Chinese sovereign USD bonds provides a natural experiment for assessing the effect of a sovereign bond issuance on corporate borrowing costs. The reference rate effect could derive from the value of country-specific information impounded into sovereign bond prices. Corporate bond prices reflect the country’s systematic risk factors as well as the issuers’ idiosyncratic risks. The issuance of a sovereign reference bond may make the market more complete, reduce adverse selection costs, and improve liquidity by acting as hedging instruments (Subrahmanyam, 1991; Gorton and Pennacchi, 1993; Shiller, 1993; Yuan, 2005; Dittmar and Yuan, 2008). These effects would all tend to reduce corporate borrowing costs.

Before the 2017 issuance of USD denominated sovereign debt, there were two outstanding small sovereign bonds denominated in USD, although their trading volume was quite small. Figure 1 plots the yield spread (relative to interpolated U.S. Treasury yields) of three sovereign USD bonds for the period from 60 trading days before to 31 trading days after the announcement of the 2017 issuance. The vertical dotted line indicates the announcement date for the new USD sovereigns and the solid vertical line marks their issuance date. Shortly before the new USD sovereign bonds were issued, the old bonds were trading at about 80 bps over the Treasury rate. The two new bonds entered the market with spreads of 20–25 bps. The old bonds’ spread fell between the announcement and issuance of the 2017 bonds. Trading nearly disappeared for the old bonds after the new bonds were issued, but the two data points we obtained (on days 18 and 19) had a very similar spread to the two new bonds. In short, it seems that the new sovereign bonds largely displaced the older one. 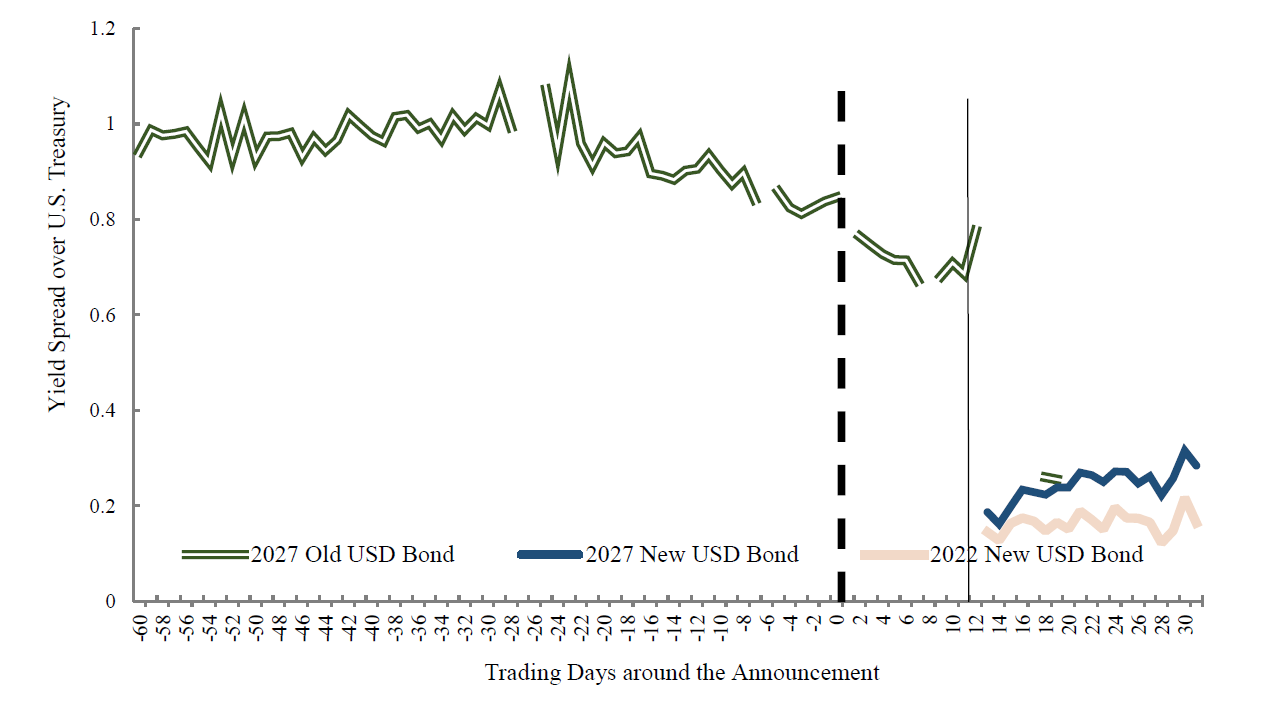 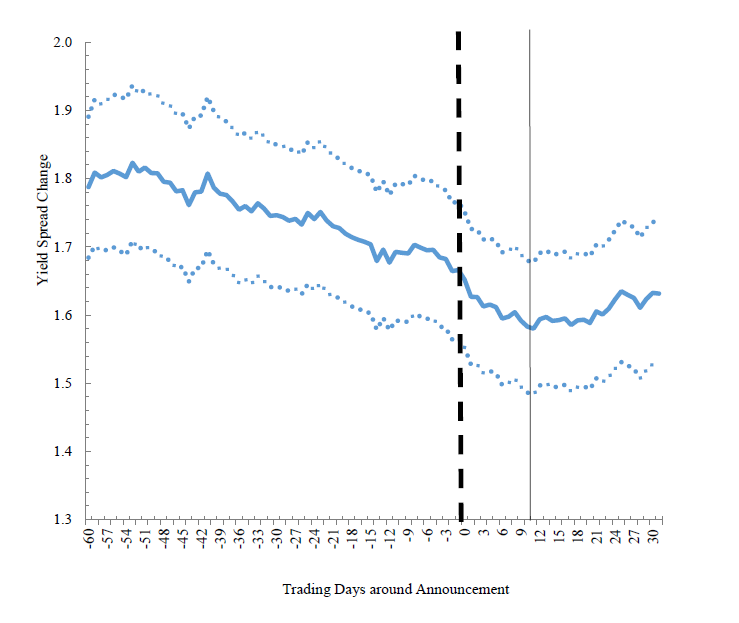 We find that corporate yield spreads declined only for USD corporate bonds. For firms that had both USD and RMB bonds outstanding, only the former bonds’ spread fell when the new sovereign bonds were announced. More specifically, for the firms that had both RMB and USD bonds, their RMB bond spreads changed by an insignificant amount of -0.7 basis points in the short window and 4.9 basis points in the long window around the announcement, while their USD bond spreads fell about 3 bps in the short window and 15 bps in the longer one. Corporate bond yields are generally determined relative to the yield on a sovereign bond of the same maturity. Accordingly, a new sovereign bond can potentially benefit corporate bonds of the same maturity more than other corporate bonds (Bekkum et al., 2019). Given the 2017 Chinese sovereign bond issuances, we hypothesize that corporate bonds with maturities closer to five or ten years will benefit the most. Figure 3 shows scatterplots between yield spread changes and maturity, together with non-parametric regression curves fitted using Epanechnikov kernel-weighted local polynomial smoothing (Fan and Gijbels, 1996). The corporate bond yield spread fell the most for bonds with maturities near five or ten years. Corporate yield spreads decrease by a smaller amount for bonds with maturities below (above) five (ten) years. This V-shaped change in corporate yield spreads is consistent with the reference rate effect and is hard to explain by any other mechanisms. 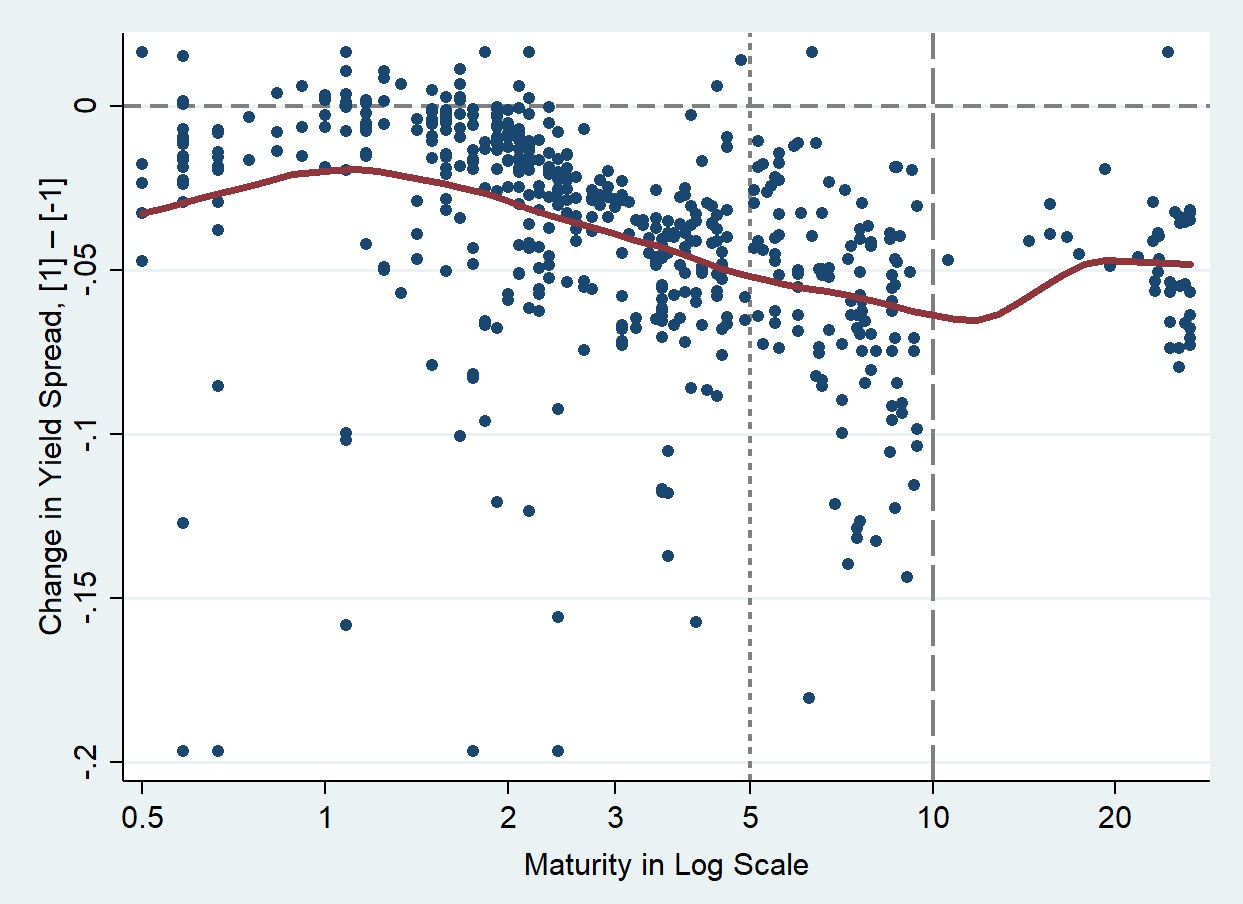 The reference bond’s effect may also improve the liquidity and pricing efficiency of risky corporate bonds, which is reflected in a lower bid/ask or lower volatility. We calculate pre- and post-announcement liquidity and volatility over the periods [-40, -21] and [13, 31], respectively. Indeed, we find that the average bid-ask spread falls from 0.375 to 0.360 after the announcement. Similarly, bond volatility decreases from 0.036 to 0.030 after the reform. The change in volatility also exhibits a V-shape around bonds with a ten-year maturity, which is similar to the effect of yield spread changes in Figure 3.


To conclude, the Chinese government’s issuance of two USD-denominated bonds in October 2017 significantly reduced the corporate borrowing rates in the offshore debt market. In response to the announcement that the Chinese government would issue USD bonds, USD corporate bond yield spreads (relative to interpolated U.S. Treasury yields) decreased by 4 bps over three days around the announcement and by 9 bps in the period of one month before the announcement to one day after the issuance. Although USD-denominated corporate bond yields fell, RMB-denominated spreads on bonds issued by the same firms did not change significantly, which is consistent with the hypothesis that the event is not associated with a lower credit risk in the Chinese corporate sector. Corporate yield spreads decreased the most for bonds with a maturity closest to the five- or ten-year maturities of the new sovereign bonds. In both of these ways, the sovereign bond effect is consistent with a reference bond, thus making it easier for investors to value corporate debt.

The evidence suggests that Chinese government and corporate bonds are complements in the offshore debt market. In other words, the issuance of government bonds provides a reference point that facilitates corporate bond pricing. This stands in contrast to the substitution relationship documented in more developed economies by Greenwood et al. (2010), Graham et al. (2014), and Badoer and James (2016). It is not obvious that emerging market firms should be encouraged to issue bonds denominated in a foreign currency. However, if that is the best way to attract foreign capital, the government can aid the process by establishing one or more benchmark bonds.