China’s real estate market has been a key engine of its sustained economic expansion. This paper argues, however, that even before the COVID-19 shock, a decades-long housing boom had given rise to price misalignments and regional supply-demand mismatches, making an adjustment both necessary and inevitable. Based on input-output analysis and benchmarking against other economies, we estimate the size of China’s real estate–related activities to be 29% of the economy and conclude that the sector is quite vulnerable to a sustained aggregate growth shock. 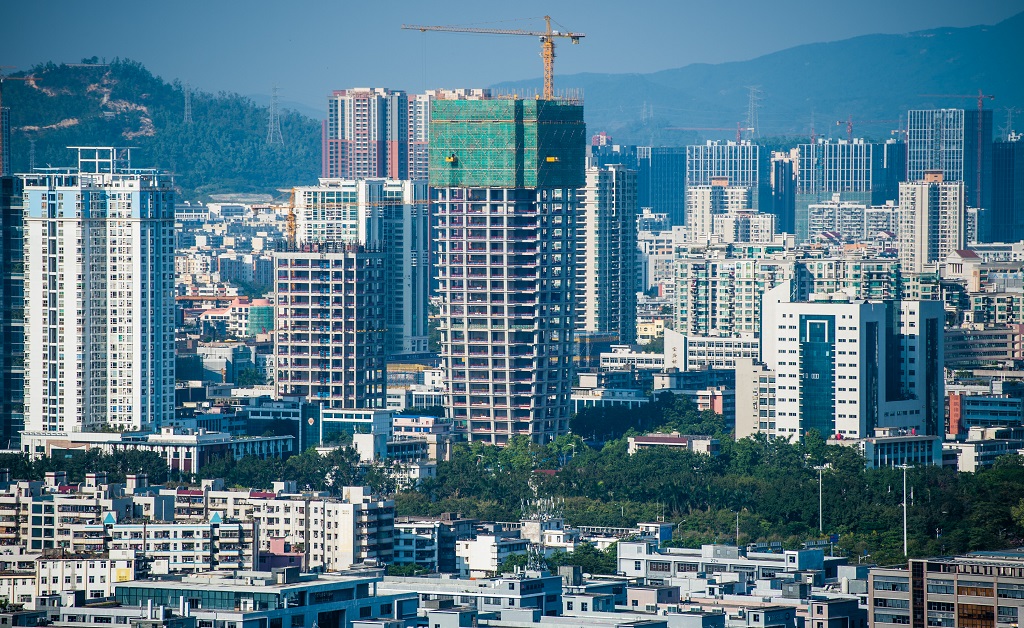 If one looks at the history of deep systemic financial crises in Western economies, debt-financed housing booms have almost invariably played a central role, especially in the post-World War II era (see Note 1). Nevertheless, it has long been argued that despite China’s truly epic real estate boom over the past three decades, the central government’s ability to tightly monitor the financial system and to resolve insolvencies quickly in the event of a crisis, makes it relatively immune to this kind of problem. This may be true, although given China’s so-far unending housing price boom, the “China-is-different” theory remains an open question.

Several authors have explored the potential implications and risks in China’s housing market, with leading examples including Fang et al. (2015), Chivakul et al. (2015), Glaeser et al. (2017), and Koss and Shi (2018). The general consensus is that although China’s housing price appreciation has been extreme, (an order of magnitude larger than what the United States experienced prior to its 2008 financial crisis), it would take a dramatic and sustained economic slowdown to create widespread instability.

But by and large these studies are based on data that are now somewhat out of date in the landscape of the rapidly evolving Chinese economy. In Rogoff and Yang (2020), we use newly available sources, especially taking advantage of the digitization of China’s statistics that has helped provide both more extensive and more accurate data, to extend and significantly update the earlier work. A central point of our paper is that even if China is indeed immune to a conventional housing-based financial crisis, given the outsized footprint of the real estate sector (which by our broadest metric, we estimate has now reached 29% of GDP), the impact of a significant slowdown in the housing sector on jobs and growth can still be dramatic and sustained.

Even with the understanding that housing data are difficult to collect and standardize, and this problem exists throughout the world, comparisons of China to other countries are sobering. Indeed, by international standards, the scale of China’s real estate boom is unprecedented. As Figure 1 illustrates, the home price-to-income ratios (see Note 2) in Beijing, Shanghai, Shenzhen, and Guangzhou place them in the top rung of the world’s most expensive cities. In particular, the price-to-income ratios in Beijing, Shanghai and Shenzhen exceed a multiple of 40 compared to 22 in London and 12 in New York (see Note 3). Of course, such price-to-income ratios might be justified if the expectation is that very fast income growth will continue indefinitely. But even aside from the COVID-19 pandemic, other factors, such as China’s rapidly aging population, a shrinking technological gap with the West, and normal decreasing returns to investment, all suggest that future growth will likely be trending downward in the coming decade. 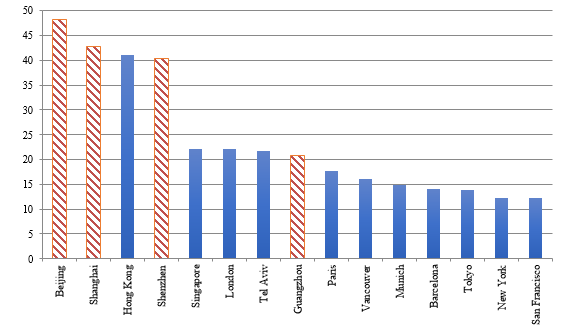 Considering the overall economy-wide impact of a shock to China’s real estate sector, which includes effects on upstream and downstream industries, the real estate sector has become an outsized part of China’s economy. To gauge how this compares to Western economies, we use a similar definition for measuring the real estate sector in other economies to construct Figure 2. As the figure illustrates, China is even more dependent on housing construction than Ireland and Spain were just prior to their financial crises, and far more dependent than the United States prior to its financial crisis in 2008. 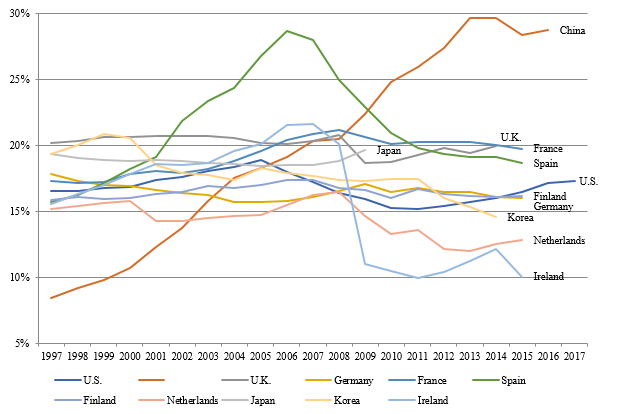 This figure presents the share of real estate–related activities in total GDP in China, the U.S., the U.K., Germany, France, Spain, the Netherlands, Finland, Ireland, Japan, and Korea.
Source: Rogoff and Yang (2020).

China may be different, but like these economies, it faces deeply adverse demographics and sharply declining trend productivity. It is true that Chinese authorities have enormous administrative power over the value of housing. Not only is there extensive zoning and regulation, but in China, private entities cannot own land, a fact that further underscores just how massive the Chinese real estate explosion has been. Authorities face a delicate balancing act as many of the policies that they could enact to hold up prices (for example, tightening regulations over new home building) might help existing owners. However, by forestalling adjustment in the real economy and exacerbating the already significant misallocation of resources into real estate, such policies may come ultimately at the expense of greater cumulative employment and production declines in the long run.

Could the COVID-19 shock prove to be the adverse growth shock that triggers a housing slowdown that could amplify the challenges facing China’s recovery? So far, this has not been the case: prices are rising in many cities, but we acknowledge that this is a worldwide phenomenon triggered in part by very low global real interest rates. But at the same time, rents have been soft, and the pandemic may have hastened the inevitable long-run trend slowdown of China’s growth. Although prices may be rising in Tier 1 cities, rents have been falling, and it is much too early to say how the crisis will ultimately play out. Overall, if one looks at growing supply-demand imbalances, it is hard to see how China’s housing market will avoid a significant long-run adjustment, which will be challenging to digest even if authorities are successful in averting a financial crisis.

Note 2: Home price-to-income ratio is calculated as the ratio of median housing price to median household disposable income, expressed as years of income.

Note 3: These comparisons are pre-COVID-19