The Rural Land Contracting Law (RLCL), announced in 2003, is a landmark law for agricultural households in rural China. It provides new legal protections for leasing agricultural land. In theory, increasing free market exchanges of land should improve agricultural productivity by facilitating the movement of land towards the most productive users. We find that the property rights reform led to a 10 percent increase in land rental activity among rural households, a redistribution of land towards more productive farmers, and a 7 percent increase in the aggregate productivity of land. We also observe an increased responsiveness of land allocation across crops to changes in crop prices.

Almost four decades ago, China began reforming property rights concerning agricultural land by moving away from a communal system of farming towards a system of private use rights for individual households. This process of property rights reform in China has since continued in waves, allowing for freer market exchanges over agricultural land. These reforms are built on the idea that allowing for free market transactions should move land resources towards productive users. This movement increases agricultural productivity and transforms the rural economy, thereby leading to aggregate economic growth.

Theoretically, well-defined property rights over land should facilitate efficiency-improving transactions. Practically, however, the extent to which property rights in land markets matter is unclear. First, there may be other market failures or constraints that prevent the efficient reallocation of land, which may not (at least in the short-run) be relieved by restoring the missing land market. Second, the importance of formal rights is questioned in the literature — some evidence on the role of property rights in agriculture suggests that informal institutions that adequately substitute for lack of formal land titles and tenures may arise (Besley, 1995; Carter et al., 1994; Brasselle, Gaspart, and Platteau 2002). Therefore, the impact of formalizing exchange rights remains an open empirical question.

In a recent working paper (Chari, Liu, Wang and Wang 2017), we explore the idea that the reform of property rights institutions facilitated market exchanges and increase agricultural productivity. To demonstrate this, we focus on one specific reform announced by the central government in 2003 called the Rural Land Contracting Law (RLCL). The RLCL increased legal protections for land contracts and specifically granted farmers legal protections for leasing contracts.

Studying the impacts of a specific reform is complicated since the agricultural sector in China has changed significantly. In our analysis, we exploit the fact that different provinces implemented the RLCL in different years after 2003. Thus, we compare outcomes for the same agricultural households before and after the RLCL was implemented in their respective provinces. The timing of the implementation varies by province but does not seem related to conditions in the rural economy, thereby allowing us to separate out the effects of the reform from other aggregate changes.

We find evidence of a significant increase in land rental activity in rural households following the reform. Specifically, the probability of new renting transactions increased by about 10 percent and the area of land rented out increased by 7 percent. This indicates that the property rights reform allowed households to adjust their land holdings through renting agricultural property. Next, we examine the effect of the property rights reform on aggregate agricultural productivity and output. The findings show that at the village level, the land reform has significantly increased overall output and aggregate productivity by approximately 7 percent.


Figure 1: Distribution of Land Cultivated (in mu) by Farmer TFP Before and After the Reform 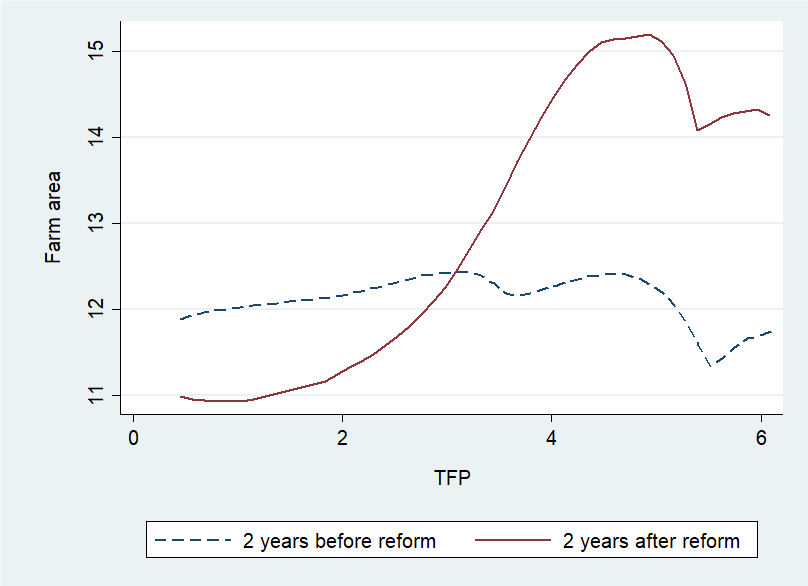 While both land renting transactions and agricultural productivity have increased, we are interested in specifically looking at the reallocation of land across farmers and quantifying the extent to which market exchanges of agricultural land accounts for the increase in output. We find evidence that the reform leads to an increase in the amount of land cultivated by more productive farmers, while reducing the amount of land cultivated by relatively less productive farmers. This can be seen in Figure 1, where we show the distribution of land by farmer productivity (as measured by total factor productivity, or TFP) before and after the reform. Low TFP farmers cultivate less land and high TFP farmers cultivate more land. This finding is consistent with the notion that reducing frictions in the land market produce a more efficient allocation of land.

We also consider the effects of the property rights reform on labor market outcomes. We observe a corresponding reallocation of labor. This isn’t surprising given that labor is a complementary input to land. Specifically, the amount of hired labor increases on relatively more productive farms but declines on less productive farms, suggesting a within-village reallocation of labor.

We find that nearly 85 percent of the observed increase in aggregate productivity can be attributed to the reallocation of land and other inputs associated with the reform. We also find that when land changes hands, the mix of crops also changes.

In the context of agriculture in many countries beyond China, ownership and use rights over land are often poorly-defined and this plausibly affects the ability and incentiveness of farmers to conduct land transactions. Our research demonstrates that households cannot fully solve the contracting problem in informal ways and that legal protections for exchange rights are important for the efficient allocation of land across farmers and of labor across sectors and space. Overall, our results establish both the importance of land misallocation as a source of productive inefficiency in the agricultural sector, as well as the positive role that well-defined property rights can have in ameliorating the problem.